The issues of human dignity and gender justice are not new to the ACT Alliance. ACT members were working on these long before the Alliance was established, and continue that work today. The idea of developing a campaign builds on the work of many theologians, activists, churches and faith-based organisations who are bravely speaking out in defence of human rights and the protection of the human dignity of all.

Th campaign aims to learn from, build on, and scale up the work done by members in addition to creating something new that we can all gather around.

The very first event at the ACT Assembly in 2018 was the gender justice event “Created Equal”. The goal was to celebrate existing work, and to inspire all to take part in the work for gender justice moving forward. The Assembly was a crucial starting point for the gender campaign, as central documents related to gender were approved and affirmed.

The campaign is being built through consultation and a wide range of material including:

We need to raise the issue of gender justice with ourselves, our own organisations and the societies we live and work in. We also need to address local, national, regional and global decision makers. All this in order to see real transformation happen.

The International Conference on Population and Development

ACT members will be participating in the Nairobi+25 ICPD conference in November, 2019.   This event marks a key moment in gender justice work as representatives from governments, the UN, civil society, the private sector and academia will be gathered to “accelerate the promise” on sexual and reproductive health and rights.  Today, the world is aiming to achieve the United Nations Sustainable Development Goals by 2030, and universal sexual and reproductive health is central to much of this agenda – ending poverty, security good health and well-being, realizing gender equality and achieving sustainable communities, among many other goals.

ACT has made 6 Commitments to the Summit:

Commitment 1: To scale up efforts to implement the ACT Alliance Gender Justice policy which will support the implementation of ICPD PoA, ensuring access to Sexual and Reproductive Health and Rights and protection from Gender–Based Violence. This includes adoption of protocols for the prevention, detection and attention to sexual and gender-based violence inside churches and faith based organisations.
Commitment 2: To promote and strengthen strategies for pastoral and community actions in coordination with different stakeholders, in the prevention, reduction and eradication of preventable maternal/child deaths through increased access to quality SRHR-services and information. The alliance members are committed to engage in dialogue based on love, trust and transparency to strive towards a change in societal norms, and harmful attitudes related to gender roles.
Commitment 3: To promote awareness and information strategies for overcoming existing taboos and resistance in addressing comprehensive sexuality education in churches.
Commitment 4: To strive towards a change in societal norms, harmful attitudes related to gender roles and work on critical theological understandings, that deconstruct gender stereotypes, promote women’s rights, bodily integrity and agency, and contribute to equality and justice for all genders.
Commitment 5: To stand up for the integrity of the United Nations and the importance of multilateralism and cooperation at times of polarisation by strengthening and deepening our existing partnerships with UN Women and UNFPA globally and regionally. This will be done by continual engagement at the ICPD, in the global policy arena, and supporting regional and local ACT members to engage in ICPD through their policy and programme work.
Commitment 6: Disaggregate the ICPD PoA as it constitutes a range of issues on which there are more common positions than contentious ones. We commit to 4 listen, while acknowledging the plurality of perspectives. These efforts require continuing a critical approach and dialogue on the intersections of religion and culture.

The ACT Tanzania Forum has also issued an interfaith commitment to ICPD, which can be read here.

ACT has worked with the Associated Press, with support from UNFPA, to produce the first in a series of videos about how faith-based organisations are addressing issues of sexual and reproductive health and rights (SRHR), gender justice, ending gender based violence, and promoting transformative masculinities. The video tells the story of the impact faith-based organisations and people of faith have in ending gender-based violence and instilling transformative masculinities in Mukuru Kwa Njenga, one of the largest informal settlements in Nairobi, Kenya.

Read more about the DREAMS project. 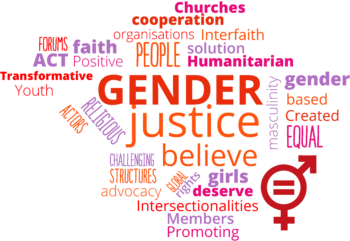 The fight for gender justice is multi faceted, including:

We want to show that we address gender justice in everything that we do, and hence we wish all activities related to gender welcome as part of the campaign.

The content of the campaign will be contextual so that the different realities that we face in different regions and countries can be addressed. Globally we will identify some areas where we want to move forward together.

Please feel free to add the logo to your gender work to show that we are part of the same movement.

The ACT Assembly in Uppsala, October 2018, gave us a new strategy and public statements to build our work on. The new 8 year strategy was approved, with gender justice as one of five programmatic priorities. Gender justice is a central element in the main message from the Assembly, a separate  gender statement was passed as well as a statement on gender justice in Latin America and the Caribbean specifically. In addition, the Gender Justice Policy approved by the governing board in 2017 was affirmed by the Assembly. See all statements, including in French and Spanish versions, here. The ACT Alliance also has Gender Security Guidelines  that cover threats to men, women and LGBTI staff. 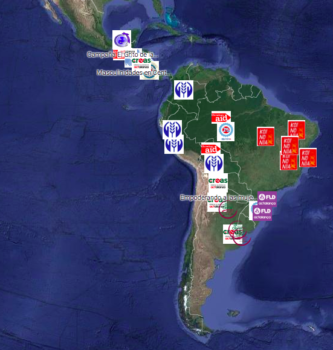 As our gender justice campaign begins, our activities are focused on increasing the capacity of ACT members to engage in gender justice work, and in strengthening our existing work and sparking new activities. This includes:

An updated gender justice policy was approved by the ACT Governing Board in June, 2017 and affirmed by the General Assembly in 2018. All members of ACT are encouraged to make their own gender policy, and this is one of the key activities in the first phase of the campaign. Please read the policy here.

These are the 8 principles laid out in the policy:

Please contact the gender CoP for more information and guidance.

We want to populate the resource bank with more material, please submit your gender related videos or written material to gendercampaign@actalliance.org.

Please email us to learn more about the campaign, or if you have questions or comments or resources to share!